It was -5 degrees out when Farmer Bill Stuart left his warm house to meet me for a tour of Stuart Family Farm. Despite having a nice warm barn to rest and eat in, most of the cows are outside, lounging on some hay Bill has put out for them. The Red Angus cattle have grown hairy for the winter.

Gus is a Maremma Sheepdog. He’s naturally nocturnal and patrols the fence-line at night to protect the animals from coyotes, foxes, and racoons. He has no formal training – he simply relies on his instinct to protect his flock. Most Maremma are standoffish to humans because they have a job to do, but Gus “is a ham”.

As a puppy, Gus tried to play with the chickens, which was a bit too rough for them. However, he has since figured out his place with them.

At Stuart Farm, there are two different breeds of chickens – ones for laying eggs (the Sex-links) and others for meat, a breed called the Freedom Rangers. The Sex-links are cozy in the upper barn during the winter. Once it is spring, the chickens will ride around in a portable wagon that takes them from their roost in the morning to a new spot on the farm each day and back to their roost at night. By moving the chicken coop each day, the chickens help fertilize the farm. Their manure is high in nitrogen, which is great for the land, but too much in one spot can burn the land.

Bill was an Animal Science major at UConn and comes from a long line of farmers! His father has a horse farm and his grandfather is a dairy farmer. After college, he studied pork and beef quality issues in Germany. In 2002, Bill won a contract through the nature conservancy to farm the land in Bridgewater, CT. But Bill had not worked with chicken before, so he had to learn.

Apparently most chicken raised for meat are Cornish chicken, which get so fat they have difficulty walking up the ramp into the roost. Bill didn’t like that. So he started raising the Freedom Rangers, which take longer to raise, but are healthier (and tastier).

Inside a separate barn, in a brooder, Bill introduces me to the piglets. They are about 2 months old. As we enter, they all crowd to one side of the heated room – they are scared of new people. However, as Bill says, “They just can’t help themselves.” They are too curious to stay away from us for long. Bill starts playing with some hay and a few brave pigs trot up to him and almost take his glove away to play with! Bill says the pigs will play with just about anything. In the farm store, he has a great photo of the pigs playing with a basketball in the spring.

Eventually, the pigs get a bit closer to me too. They move in a cluster and their noses are so wet!

One day my mother-in-law was driving by Stuart Farm and two pigs were just walking down the street. It looked like they were just gossiping, she recalled. Bill laughed and explained, “They seem to know when a branch comes down and the electricity on the fence is out.” But they always come back.

Inside the brood, where the piglets stay until it is warmer outside, the pigs have naturally set up separate areas for sleeping and relieving themselves away from where they eat and drink. They are very clean animals despite their typically muddy appearance. Since pigs do not have sweat glands, you have to keep the pigs cool. In the warm weather, pigs need shade as well as water so they can make mud to roll around in and lay in. Otherwise, they are very clean.

The big trouble with pigs is that they will root, which can wreck your land. Bill has “sacrificed” a portion of his land specifically for the pigs for rooting around in, which he fixes once every year.

Stuart Family Farm is Animal Welfare Approved, which means they, and the slaughter house they use, have met high standards for the quality of care and the treatment of their animals in regards to health, safety, environmental responsibility and the humane raising of the animals. The slaughter house Bill uses conforms to the Humane Slaughter Act that provides animals with freedom from fear and freedom from pain by keeping them in uncrowded holding pens and rendering them unconscious before bleeding them out so that the slaughter is painless.

Bill focuses on providing his animals with the 5 Freedoms. 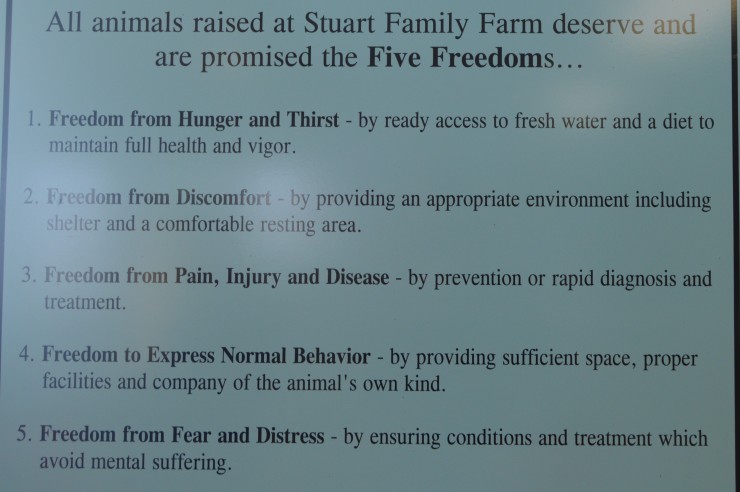 He also does not use pesticides or herbicides and makes sure there are no slurry ponds and obviously no feedlots. He uses fish meal fertilizer from Neptune’s Harvest. With about 300 acres for grazing, his cows rotationally graze throughout the farm. To keep his animals safe, he makes sure the fence is secure, that there are no icy spots on the farm, that the barns are sound (he recently put on a new roof!), and that the equipment for the animals’ transportation is safe. And then there is always Gus! 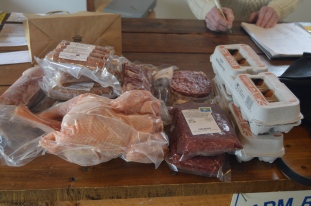 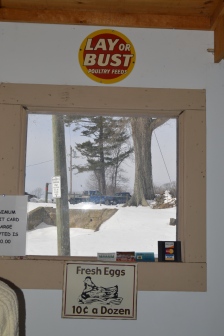 View all posts by FireKat

One thought on “Stuart Family Farm – Warm in the Winter”